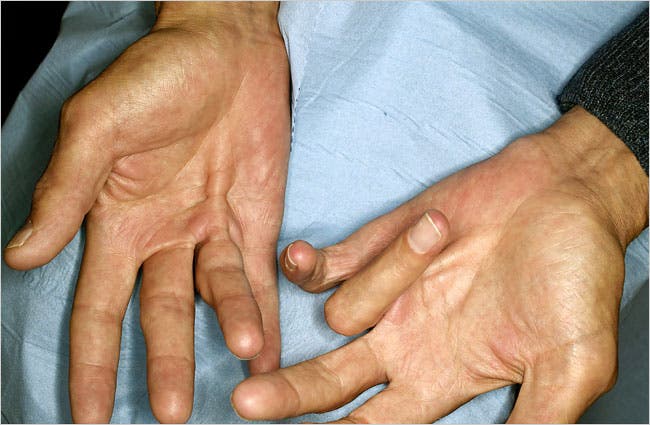 Needle aponeurotomy or percutaneous fasciotomy, involves using the bevel of a hypodermic needle to essentially shred the ropes of constricting fascia characteristic of Dupuytren’s disease. The disorder, named for Baron Guillaume Dupuytren, a 19th-century French surgeon who wrote about it, afflicts up to 25 percent of people over 40 in Western countries and is most common in men of northern European descent. Ronald Reagan had it; so does Margaret Thatcher. Risk factors for the disease include hand or wrist trauma, repetitive strain, alcoholism, smoking and diabetes.

Needle aponeurotomy, which leaves only superficial puncture wounds, was developed 30 years ago by a group of French rheumatologists and is now being practiced in the United States by fewer than a dozen physicians.

“Fasciectomy is a delicate procedure that requires meticulous technique,” said Dr. Steven Glickel, director of the C.V. Starr Hand Surgery Center at St. Luke’s-Roosevelt Hospital Center in New York. Moreover, he added, “Patients have to be committed to physical therapy” for six weeks to four months before they can expect to regain full function of the hand.