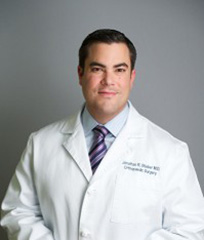 Two NYU Langone Health surgeons performed the first surgical procedure in the U.S. for disc herniation using the Barricaid system from Intrinsic Therapeutics, according to a Newswise report.

2. Intrinsic Therapeutics earned FDA premarket approval for Barricaid in February. The system includes a titanium and polyester implant designed to reduce reherniation risk by closing large annular defects in the outer rim of the disc.

3. Outside the U.S., the device was used in a randomized controlled trial of 554 patients and was shown to reduce recurrent symptomatic herniation by around 50 percent compared to patients who underwent discectomy alone.

“We determine during surgery if the patient has an annular defect that could benefit from repair,” said Dr. Smith. “Implanting the Barricaid device is then immediately performed following the discectomy. The patient should be able to go home after a few hours in the recovery room.”