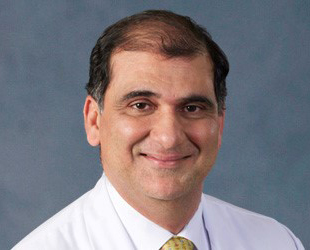 Dr. Bakshi practices interventional pain management. “I do minimally invasive procedures to help diagnose and treat neck and back pain,” he explains.

He conducts presentations for physicians locally and abroad. Dr Bakshi was an International Course Director for the Global Update on pain in Mumbai, India in 2006, 2012, and 2015, NY/NJSIPP presenter and faculty instructor for hands on cadaver workshop for the past several years, and was invited to be a guest lecturer by the Egyptian Pain Society in Cairo, Egypt. He is also a Course Director for the Business of Pain Medicine Conference in Washington, DC since 2015.

Dr. Bakshi has special interests in the field of spinal cord stimulation and has lectured and published extensively on this topic. As part of a nationwide multi-center study, he implanted the first spinal cord stimulator for refractory angina in the New York region at Lenox Hospital. The procedure was transmitted live to an international cardiology conference in Washington, D.C.

Dr. Bakshi has been the Medical Director for the New York Region of National Spine and Pain Medicine for the past 4 years. During his time at NSPC he served on the executive committee and was co owner of NSPC. Prior to his time with NSPC, Dr. Bakshi was the Director and owner of a multi physician group of interventional pain physicians named Manhattan Spine and Pain Medicine, established in 2003. He also acted as director of pain management for Healthcare Associates in Medicine in Staten Island, New York.

It was during his residency in anesthesiology that Dr. Bakshi became interested in pain management. “I was taken aback by the number of patients I saw who had endured years of suffering, and had gone to different doctors without being able to pinpoint what was causing her pain,” recalls Dr. Bakshi. “The pain management doctors were usually able to figure out what the problem was and help the patient. That was my impetus to specialize in pain management.” During his anesthesia training, Dr. Bakshi received the Robert D. Dripps, MD, Memorial Award for Outstanding Resident in Anesthesiology.

Dr. Bakshi has been recognized as one of the best physicians in his specialty of pain medicine. He was named to New York Magazine’s Castle Connolly’s Top Doctors for several years running. He was also named a top doctor by U.S. News and World Report.